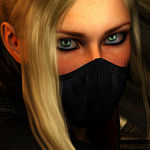 Really, there is nothing to writing. It is the writer's blood, sweat, and tears. - A Novelist on writing

I've always hated ABOUT ME user pages. I don't know what to put here, or I will often put too much here. So, where to begin.

I am located on the Wyrmrest Accord server in the MMORPG: World of Warcraft. I have roleplayed in many games and many different mediums. My favorite roleplay happened in a Yahoo! LOTR group. I am currently attempting a roleplay that is so large and spans a few characters.

Currently, I am creating a character blog for my characters that I play in World of Warcraft. I don't know the website it will be on yet. I have been going back and forth on either Tumblr or Blogspot for it.

What is a character blog?

Character blogs are blogs that are written by roleplayers from their character's point of view. These types of blogs enhance the character's world much more than just roleplaying in a game. In the game, a roleplayer is limited to roleplaying within the confines of the game's engine. A blog allows the roleplayer freedom.

Who is A Novelist?

I am a mother, a wife, and a writer. I am currently working on several novels with my husband. On top of that, I am an avid gamer. Currently, I am enjoying many different types of games. Yes, women do play games. I don't know how many times that I had someone question that. I tend to have a very black and white view of things.

I've been roleplaying for as long as I had the internet. I got my start in Yahoo! and MSN roleplaying groups by contributing to post by post roleplaying. I find this type of role-playing easier than in-game RP. You can sit there, and you can think of what you want to type in long descriptions.

World of Warcraft was NOT the first in-game RP that I participated in. When EverQuest opened their first RP server, I was role-playing on their with a High Elf enchanter named Ninnydari. I moved to Dark Age of Camelot, and I role-played their as well.

After playing Dark Age of Camelot for quite some time, my husband and I participated in the World of Warcraft beta. While I tested, I was also in character. Although there were years (six to be exact), we role-played in every game that we took part in. Sometimes, it was just us. Other times, it was with other people.

Leveling speed doesn't have anything to do with my roleplay. When I am online, I am usually in a duo with my husband. He sets the pace. However, if I am alone, I will tend to level quite quickly.

Player vs Environment | Player vs Player

I don't PVP, and I will only run dungeons (via the Dungeon Finder) with my husband. If my guild decides to do these things as a group, then I will as well.

I bring many strengths to role-playing. The first one is that I research my characters. I have inherited this from my choose of profession.  If the character can not fit into the world, then it is immersion breaking. That is why you will never find myself playing a dragon or a scourge character seriously.

I also create intriguing storylines for my characters and for others that interact with my character. Their style of dress, their speech reflect their storylines as well. As well as the mount that they currently equipped. For example, Laelithra's griffin is slowly being corrupted. The end result will be the Death Knight's flying mount.

Like most of my writing, I tend to role-play with very dark themes. This makes my role-play mature. The genre that I write in is dark fantasy. So, what does that mean? The tone of my role-play and writing is very dark. For instance, you will not find many jokes in my character profiles or short stories. My tales have a dark undertone. It will make the reader uncomfortable and hopefully challenges him because the average role-player expects a "happier" role-play.

Uh-oh, you marked mature. Does that mean that you ERP?

Nope. I'm sorry to disappoint you. The reason for the mature tag is for the content in my role-play and short stories. There tends to be a lot of violence in any role-play that I am apart of.  I do not have any relationship RP arcs with anyone. The only exception to this is my husband.

I am what is considered a casual player. While I do have days logged on several of my characters, it has slowed down considerably. The amount of time I am online is a direct correlation to how busy I am as a novelist.

Because as a novelist I work from home, I am off and on throughout the entire day. The amount of playtime that I have depends solely on the amount of editing that I have to do that day. I write 72 hours a week; I take Sunday off.  If I have to edit or write, my play time will not be much as it would be if I am playing on Sunday.

Characters on Wyrmrest Accord

Wyrmrest Accord is a PST Role-playing server that was opened on January 16, 2009. Although I am in EST, I and my husband call this server our home.

The Demon in the Darkness  by The Princes

When a battalion of clergy led by Sandric McBane disappears in Northrend, his wife and her demonic allies try to find him.

Retrieved from "https://wowrp.fandom.com/wiki/User:ANovelist?oldid=12902"
Community content is available under CC-BY-SA unless otherwise noted.